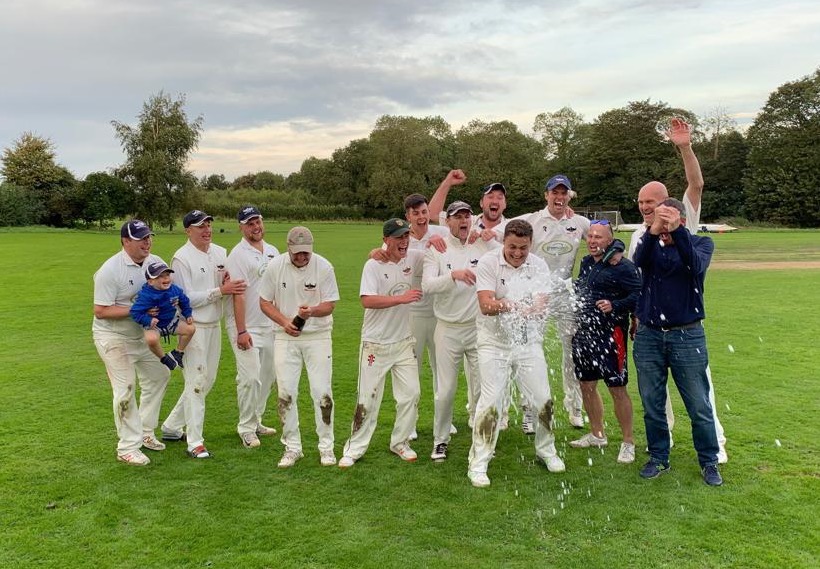 2019 has been a fantastic summer for English Cricket and whilst England were bringing home the World Cup and fighting hard in the Ashes closer to home Whixley Cricket Club were having a successful summer of their own with the 1st XI crowned both division 3 champions and Barrett Cup winners in the Nidderdale and District Amateur Cricket League.

Back in July, inspired by England’s world cup win the week before, Whixley beat Arthington in the Barrett Cup Final by 7 wickets overhauling the target of 119 thanks to Jack Witham’s 52 not out.

If England’s cup win inspired Whixley’s own cup win it was the nerve jangling way the world cup was won that typified the way the 3rd division was gained. Strong batting performances formed the basis of Whixley’s season which unfortunately was regularly interrupted by the changeable weather but saw Whixley remain unbeaten until the penultimate game when Arthington would gain some revenge for the cup final defeat with an 8 wicket win. This would leave Whixley tied for top spot with North Stainley going into the last game and hoping for some of Ben Stokes nerves against Markington. Batting first Whixley posted 166 for 8 from their 40 overs largely thanks to 50 from Josh Forster and 42 from skipper Jordan Webster. They then bowled Markington out for 162 with 8 balls to spare to gain a narrow 4 wicket win and more importantly match North Stainley’s points tally thus winning the division on net run rate.

Jack Witham won the team’s batting award with 721 runs at an average of 60 and brother Sam Witham took the bowling award with 36 wickets at 12.50 runs per wicket.

Whixley 2nd XI can count themselves unlucky to miss out on promotion by 0.5 points in a season fragmented with games called off due to weather and opposition concessions. In their last game they beat promoted Ripley 3rd XI by 30 runs. Whixley scored 207 for 8 with star batsman Charles Baines top scoring with 76 to finish the season with 736 runs at an average of 92. Whixley then dismissed Ripley for 177 thanks to 5 wickets from Steve Duffin to see him top the team’s bowling rankings with 23 wickets at an average of 8.65 runs per wicket.

Whixley Cricket Club would like to thank all sponsors, supporters, volunteers and players for all their help and support throughout the season.