Established circa 1920, the Club served the recreational needs of the workers from the local farming community and from the local village trades of wheelwrights, builders, joiners, cobblers, shopkeepers , horticulturalists, nurserymen and other artisans. The menfolk of this thriving community played cricket on a wired-off square at Paradise Farm on New Road, Whixley, by kind permission of the then tenant of the West Riding small-holding, Mr Harry Warrington. The Club’s pavilion was a wooden structure, without mains water or electricity. Teams in those early days played in the Harrogate Saturday League and the Hessay Evening League.

In 1958 the team moved to Rudgate Fields on Ouseburn Road, by kind permission of Mr Maurice Daniel of Stonegate Farm, Whixley, when the pavilion was totally dismantled and rebuilt on its new site.

In 2005, the Pavilion suffered an arson attack and was totally destroyed in the fire.

The whole future of the Club was put in jeopardy and the ability to complete in planned fixtures was put in doubt, but due to the commitment of the playing-members, and their belief that sport plays a vital role in village life, they launched an ambitious plan to rebuild this historic club like a phoenix from the burning ashes.

Since the field was not owned by the Club, the project necessitated, in the longer term, both the acquisition of the freehold of the field and the provision of a new pavilion. However in the immediate term, a temporary structure was purchased with local support, so that the 2005 season could proceed, albeit with some temporary difficulties.

Moving into the 21st century 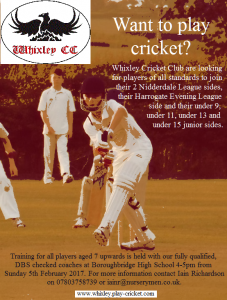 Since then the Club has formed a Board of Trustees, which has registered the Club as a Charity. Together, they have organised a series of fund-raising events, and with the support of the Sports and Arts Foundation, along with other charitable foundations, has acquired the freehold of the field which has enabled the Club to progress a Planning Application for the construction of a new pavilion.

The Club -membership is now actively progressing fund-raising for an enlarged permanent pavilion, meeting up- to- date standards, complete with mains water, and sustainable energy supply, that will accommodate both Juniors and Seniors, on a two-wicket sports ground, that will support the growing needs of the whole Club.

Honours to build upon

Over the past 50 years, Whixley’s efforts on the field have resulted in the following honours, among others:

Whilst we provide lots of opportunities for healthy exercise throughout the year, the main thrust of our outdoor recreation is from April to October, with either mid-week evening practices and match fixtures, or weekend match fixtures.

Participation in cricket is both fitness improving, and weight reducing. New Members will be given opportunities to participate in limited- overs evening matches, which are less time-demanding; or , individuals may wish to make themselves available to enjoy longer summer Saturday afternoons batting, bowling and fielding, with all the excitement of finely balanced games. Fitness levels are improved through running, fielding, and bowling , whilst better eye and hand coordination is gained through catching and batting. And the pride gained in the winning of games depends upon the best deployment of everyone’s skills, energies, enthusiasm, and abilities. One’s enjoyment of the game is enhanced through interaction with other players and through an appreciation of the finer points of field-positioning, and team-play. And of course, after each game there is the opportunity to socialise, and to relax over a drink at a local hostelry.