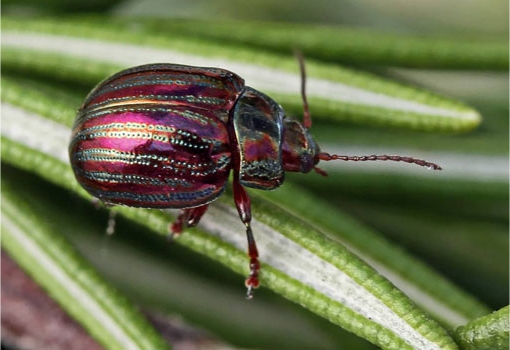 The rosemary beetle is an insect of about the same size and shape as a ladybird (6-8 mm), and which has been devastating our rosemary bush. They are an iridescent greenish-bronze in colour, with purple stripes along the length of their bodies. They eat the foliage and flowers of various aromatic plants, including – and especially – rosemary, but also lavender, sage, thyme and some other related plants.  We have collected and destroyed about 100 of the insects in our garden this week.

These visually rather attractive (but alas very destructive) beetles were first reported in London in the UK in the mid 90’s having arrived from southern Europe. They are now widespread throughout England and Wales. Both the adult beetles and the larvae feed on the foliage and flowers of the plants, and are most active between spring and late summer.

The beetles themselves, and the damage that they cause, aren’t especially obvious until the infestation becomes fairly severe, so we thought people might like to know that the insects are active in our area and check their own rosemary bushes.  The RHS web page has more information about the beetles and how best to control them, most likely simply by looking for them and picking them off as they appear (although it seems pesticides could be used if really necessary):