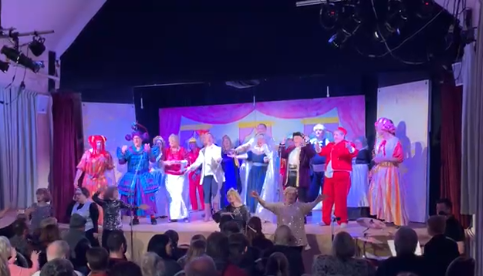 I have never, EVER, belly laughed as much as I did last night. I went for the first time to see the Whixley community Pantomime, and after almost a year of being pre warned by the village (and the cast!) that it’s not the ‘slickest’ Panto we’d ever see, our expectations were suitably placed.

They were absolutely right. Lines were missed, costume falling off, set knocked into! Yet it was without a doubt the most charming, fun, hilarious, wonderful piece of theatre. It was the epitome of why theatre was made.

Whixley Pantomime was created for the community, it is accessible to literally anyone local who wants to be in it, and that is why the audience adored it, the cast had us round their little finger with bad jokes, brilliant costumes (Gus Gus was my favourite!) and joyful humour, as well as sing a longs and dance breaks.

I was incredibly proud of my own ‘Whixley Tappers’ who hadn’t tapped a step up until a few months ago, yet the Director trusted us to be a part of the production, they sparkled (literally in their costumes!) but the sparkle in their eyes of excitement and magic and happiness is why i want to be a part of this production in years to come. It is special in many ways.

It comes to no surprise (these days!) that poor Cinderella took ill on our evening, and like an absolute pro, we are told the director will be jumping into the glass slippers in one swoop, then acts like she’s been playing the role the whole time, despite some costume mishap, which only adds to her charm!

Buttons was terrific, (Whixley’s very own Billy Pearce) and with a side kick like Gus how could they not win the hearts of the audience?
Some favourite moments are of course two grown men in huge mice heads, pulling at each others tails, a terrific carriage and horse, a wonderful fairy godmother reveal, choking on a bread roll, a suitably villainous step mother and two of the ugliest ugly sisters the audience has ever seen.

I’ve seen many a panto over the years, I’ve been in half a dozen myself and had the pleasure (or not!) of working with many a celebrity, working with obscene budgets in theatres like the Alhambra and such, none of them touched the hearts of the audience like this one did.

The buzz at the end of the night was magical, and the the applause was long, because this very non slick panto was created by our own friends, our family and our neighbours, the cast, the creative team, the costume makers, the backstage crew, the band, the bar staff, all coming together to make something that belonged to the whole community, and we were proud.